The continuous chart patterns which are formed after strong moves, just like the rectangle patterns, are called pennants. The buyers and the sellers halt before moving the pair in the same direction, followed by a big upward or downward move.

Pennants are classified into two types:

BEARISH PENNANT: It is formed when the downtrend is steep and nearly vertical. Few sellers close their positions when the price falls sharply, while few sellers join the trend and make the price combined for some time.

Once adequate number of sellers contribute, the price starts to break below the bottom of the pennant. It, then, continues to plunge. The drop goes on after it makes a breakout to the bottom.

Now let’s discuss how can we trade bearish pennant.

First, we need to establish a short order at the bottom of the pennant with a stop loss above the pennant in order to get out of the trade immediately, in case the breakdown is a fake out. 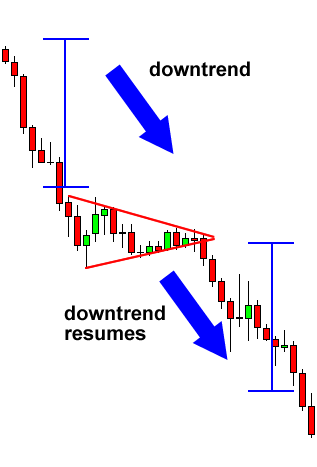 BULLISH PENNANTS: They are defined as the continuation candlestick patterns occurring in strong uptrends. When bulls are ready to carry the price higher, followed by the apprised period of consolidation, the price halts to climb sharp.

For example, the price climbs sharp, vertically. The price then makes another strong move upward followed by the breakout. 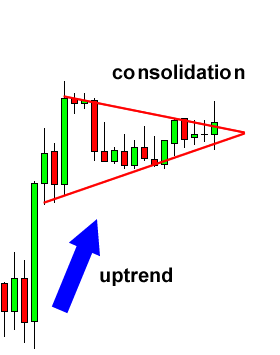 To make it work, we have placed long order above the pennant and stop below the bottom of the pennant to avoid fakeouts.

Here, you can see the pennants are small in size yet they can signal great price moves.