Triangle chart belongs to the group of continuation patterns under technical analysis, meaning that the price will continue in the trend direction like it was moving before the pattern appeared. It draws in price moving into a more compact range and also displays the conflict between bulls and bears.

A triangle pattern in formed when it builds minimum five touches of support and resistance. It is categorized into three formations:

SYMMETRICAL TRIANGLE: When the slope of the highs of price mingles with the lows of price to a point and forms a triangle, a symmetrical triangle is formed. In the formation, the market is making lower highs and higher lows, that is, the price is not pushed far enough in order to make a clear trend by either the sellers or the buyers. Now, the consolidation takes place when it is a draw.

In the figure given, both the buyers and the sellers are not pushing the price in their direction. This results into lower highs and higher lows. 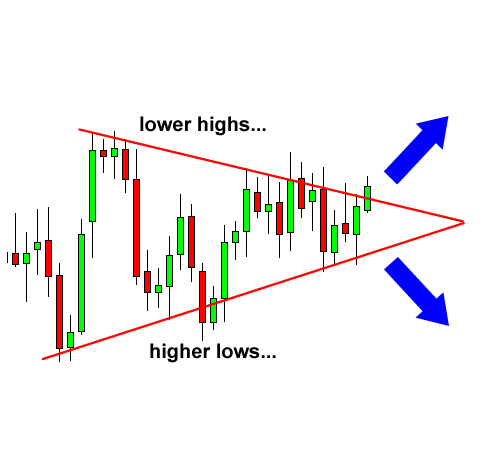 We can now take the advantage and place entry orders above the slope of the lower highs and below the slope of higher lows of the triangle. As we already know that the price will break out, we can move in the whatever direction the market moves. 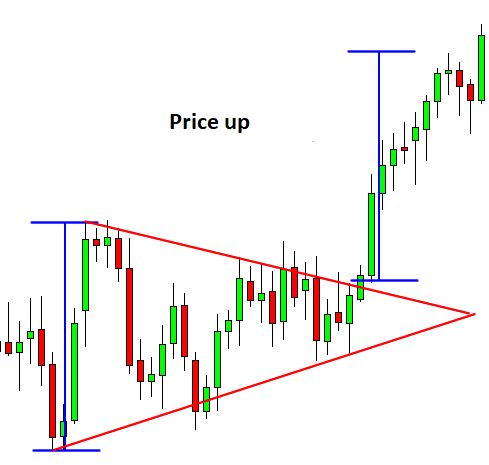 ASCENDING TRIANGLE: A ascending triangle pattern can be easily recognized in an uptrend and also is locked as an entry or exit signal, in a bullish chart pattern. This type of chart patterns occurs in the presence of a resistance level and a slope of higher lows.

During this time, the buyers cannot surpass a certain level, therefore, they start to gradually push the price up as proved by the higher lows.

In the figure given, the buyers start gaining strength with higher lows. They pressurize the resistance level and, hence, a breakout takes place. 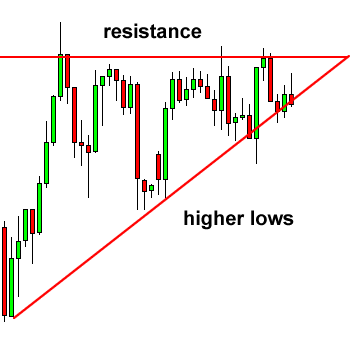 Many believe that the buyers will gain and the price will break out prior to the resistance.  But it does not happen in every case.

At times, when the resistance level is very strong, there is not enough buying power for acceleration. The price will mostly go up. So do not get carried away with which direction the price goes. Be ready for the movement in both the directions.

In this scenario, we need to set an entry order above the resistance line and below the slope of the higher lows.

In the figure given, we see that the buyers lost and the price begins to plunge. The drop is relatively the same distance as the height of the triangle formation. 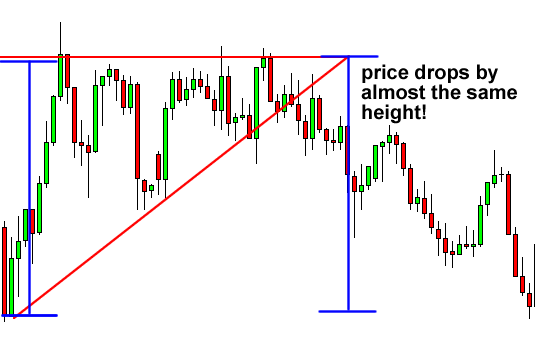 If the order is set below the bottom of the triangle, the buyers could have made some profit.

DESCENDING TRIANGLE: As the name suggest, descending triangle is identified in downtrends generally in a bearish chart pattern. It has a string of lower highs forming the upper line and the lower line is a support level where the price does not break.

In the figure given, the price is continuously making lower highs which indicates that the sellers are making profits against the buyers. 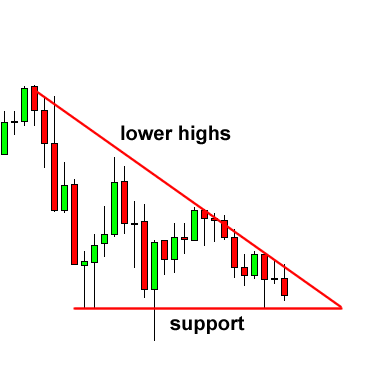 In the figure, we have placed entry orders above the lower highs and below the support line. Then, the price will wind up by breaking above the top is the triangle pattern. 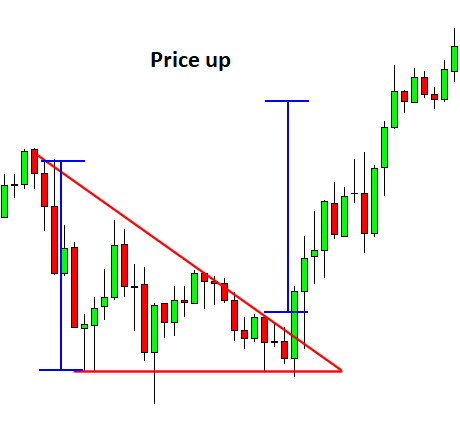 Following the upside breakout, it goes ahead to climb higher the same distance as the height of the triangle.

You can make good profit if you place an entry order above the top of the triangle and aim as high as the height of the formation.